BEDCon is over again. This marks the third year I have been there and it still has the cheapest prices for a general conference I have seen in Germany. If you are looking for a nice conference in Berlin you should definitively consider it.

The three most interesting talks I attended:

Talks I would have liked to see:

Surprisingly I had two talks accepted for BEDCon. I am especially glad that the more important talk on Search-Driven Applications with Tobias of Exensio went really well and we were talking to a packed room. For me giving a talk in a team is far less stressful than giving a talk alone. I am looking forward to giving this talk again at Entwicklertag Karlsruhe in May. The slides are available on Speaker Deck.

My second short talk on Akka also went ok, the slides are online. If you are interested in Akka you can also have a look at my blogposts on message passing concurrency with Akka and supervision in Akka.

I know, I am repeating myself, but again I stored all the tweets for the conference in Elasticsearch so I can look at them using Kibana. The usual rules apply, each retweet counts as a seperate tweet. I am using a sharded version of the index so some of the counts might not be totally exact. 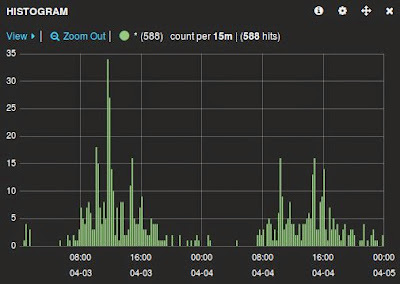 There seem to be more tweets on the first day. I also had the impression that there were fewer people there for the second day at all. The first day has a spike that is probably related to the blackout at around 12. 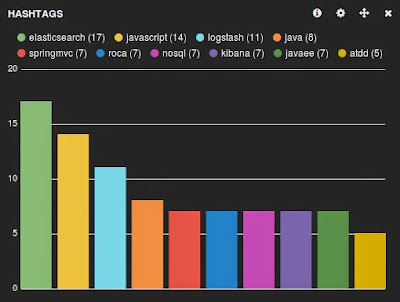 This is a surprise: elasticsearch beats any other hashtag. logstash, kibana, springmvc, roca ... very specialized hashtags as well. As you can see from the numbers there weren't that many tweets at all. 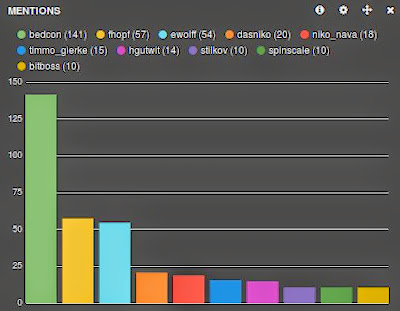 An even bigger surprise for me: I seem to have got mentioned a lot. After looking into this, this is caused by retweets counting as a mention as well. I had some tweets that got retweeted a few times.

There is one thing that had me quite upset. During a short power failure (which was not related to BEDCon at all) I was watching a short talk. The speaker had nothing better to do than to insult the technicians that were there to help him. I don't get this attitude and I hope to never see this speaker again on any conference I am attending.

BEDCon is a great conference, all the people involved are doing a great job. I hope in the following years I can find the time to go there again.