The Pragmatic Programmers Rubber Duck of the 19th Century

In their influential book "The Pragmatic Programmer" Andy Hunt and Dave Thomas describe a technique for finding solutions to hard problems you are struggling with. They recommend to just tell the problem to somebody, not for getting an answer, but because while explaining the problem you are thinking differently about it. And, if there is nobody around you, get yourself a rubber duck you can talk to, hence the name of the tip. 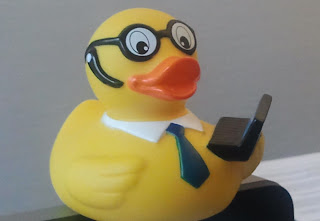 It's obvious that this is not a new discovery made by the authors. Everybody has experienced similar situations where they are finding a solution to a problem while explaining it to someone. But I have been surprised to read this in the essay "Über die allmähliche Verfertigung der Gedanken beim Reden" by Heinrich von Kleist dating to 1805/1806 (translated from German by me):

If you want to know something and you can't find it in meditation I advice you [...] to tell it to the next acquaintance you are meeting. He doesn't need to be a keen thinker and I don't mean you should ask him: no! Rather you should tell him about it in the first place.

1806. The same tip (without the duck). This is another case where we are relearning things that have been discovered before, something especially computer science is prone to.

So, what is the big achievement of the authors? It's not that they are finding only new ideas. We don't need that many new ideas. There is a lot of stuff around that is just waiting to be applied to our work as software developers. Those old ideas need to be put into context. There is even a benefit in stating obvious things that might trigger rethinking your habits.