Last week I attended SoCraTes, an international Open Space conference on Software Craftmanship and Testing. As a few days have passed now I'd like to recap what sessions I attended and what was discussed. Though this is only a minor part of the sessions that have been discussed you should get a good grasp on what kind of topics are shared during the two days.

The conference is located at Seminarzentrum Rückersbach which is close to nowhere (Aschaffenburg). As there is nothing around you where people would normally go during conferences (pubs) everybody is staying on the premise for full 48h. You sleep there, you eat there, you spend your evening there. Generally you are around the same people from thursday evening to saturday evening which leads to a lot of interesting talks and evening activities.

Some of the time is needed for the framework of the Open Space. On thursday evening there is a world cafe, where you spend time on different tables with different people to discuss what you expect from the conference and what you would like to learn. 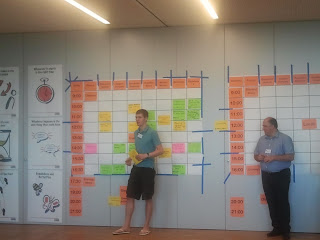 Every day starts with the planning of the day, the marketplace. Every participant can propose talks, discussions and hands on sessions and put those on the schedule. There are several rooms available and, if the weather permits, there is also plenty of space outside for discussions. The day then is dedicated to the sessions, some of which I will describe below. In the evening there is some kind of retrospective of the day. Also you can propose evening activities, which can range from discussions, coding and board games.

The sessions I will describe now are only a snapshot of what has been available. As there are so many good things it's sometimes hard to decide which session to attend.

Agenda for day 1, photo taken by Robert Hostlowsky, who also blogged about SoCraTes over at the Codecentric blog.

Sergey, who did a lot of sessions for the event, discussed a problem he is facing when trying to implement Continuous Delivery. One of the basic concepts of CD is that you should be using the same artifact for all of your stages, that means an artifact should only be build once and deployed to the different systems for automated testing, user testing and finally deployment. When an artifact is promoted to one of the later stages you would like to update the version so it is obvious that it is a real release candidate. Depending on the technology you are using it might not be that easy to update the version without building the artifact again.

Integrated Tests are a scam

This session, inspired by this article by J.B. Rainsberger, mostly revolved around the problems of testing database heavy applications, where some business logic tends to be contained in the database e.g. by means of OR mapping configurations. During the discussion it became obvious that the term integration test is too overloaded: A lot of people are thinking of integrating external systems like databases whereas others think of it as integrating some of your components. I learned about Hexagonal Architecture which I didn't know as a term before.

Markus Gärtner hosted a laid back outdoor session on determining in which areas of your professional life you would like to improve. First we collected all the stuff we are doing daily on a mind map and discussed them. Next we determined which parts we would like to improve in during the next months. I have done similar things for myself before but it was interesting to see what other people are working on and what they are interested in. 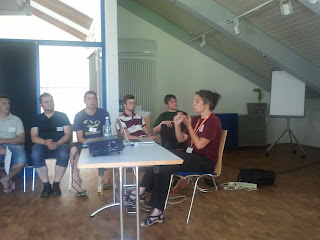 Nicole introduced some of the concepts of specification by example using the hot dog point of sale that was also used for the architecture kata during last years SoCraTes. She described some of the experiences they had when introducing it in their company (which doesn't sell hot dogs as far as I know). Specification by Example and BDD had been huge topics during last years conference and I would really like to try it once and see if it really improves communication. The (german) slides she used as an introduction are also available online.

A few people gathered to discuss the implications functional programming has when designing an application, e.g. when to use higher level functions. Unfortunately nobody was around who had already implemented an application in a functional way. To get some experience we tried to do the Mars Rover kata in Java Script. The kata probably was not the ideal choice as it is rather stateful and therefore a more advanced problem. 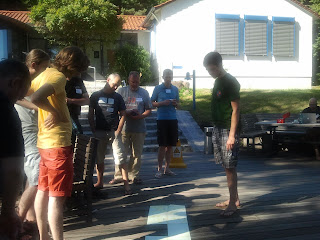 A discussion on self management and everything around it. People shared some of their practices and Jan showed his foldable Personal Kanban board. It's a fact that you can really spend a lot of time thinking about productivity which sometime is not the most productive thing. But Personal Kanban seems to help a lot of people so I am planning to read the recommended book about it and try it for myself.

Sebastian proposed a session on VIM where everybody should show their favourite plugin or feature. I am still a novice VIM user so I mainly learned some of the basics. Quite some people there are using VIM for their development work, mostly with dynamic languages I guess. This video on InfoQ has been recommended and after watching it, I am also recommending it here.

Another talk by Nicole where she introduced Monads, starting with an example in Java and moving on to Haskell. I have a better idea now on what Monads could be but the concept still is too abstract for me. 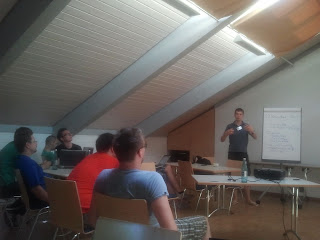 Another session by Sebastian where we discussed the SOLID principles, considered to be the basics of good object oriented design. It was interesting to see that though you think you know the concepts it is still difficult to define them. While looking at some examples it also became obvious that sometimes you might follow one principle while violating another. Unfortunately I couldn't stay for the second, practical part of the session.

During the world cafe Daniel Temme mentioned that he had given a talk last year on quitting your job and quit his job just again. He told me parts of the story in the evening but I was glad that he decided to give the talk again. Though it is rather provocative the story behind it is important and spans a lot of areas of your life: Sometimes you are caught in your habits and don't really notice that the right thing to do would be something else. Daniel is currently on a journey where he visits company and works for food and accomodation.

SoCraTes was really awesome again. Thanks to all the organizers and participants that shared a lot. I'll definitely try to be there again next year.