Last weekend I attended FrOSCon, the Free and Open Source Software Conference taking place in St. Augustin near Bonn. It's a community organized conference with an especially low entrance fee and a relaxed vibe. The talks are a good mixture of development and system administration topics. 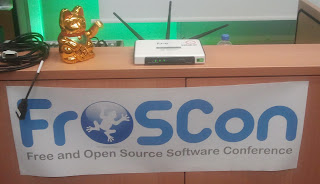 Some of the interesting talks I attended:

Though this session was part of the PHP track it contained a lot of valuable information related to working with legacy code in any language. Besides strategies for getting an application under test the speakers showed some useful refactorings that can make sense to start with. Slides

Christian first showed some of the properties that make up a good command line app. You should choose sane default values but make those configurable. Help functionality is crucial for a good user experience, via -h parameter and a man page. In the second part Chistian introduced some Ruby gems that can be used to build command line apps. GLI seems to be the most interesting with a nice DSL and its scaffolding functionality.

Isabel, who is very active in the Apache community, introduced some of her findings when trying to make students, researchers and professionals participate in Open Source. The participants where a mixture of people running open source projects and developers that are interested in contributing to open source. I have been especially interested in this talk because I wouldn't mind having more people help with the Odftoolkit I am also working on. When working with professionals, who are the main target, it is important to answer quickly on mails or issues as they might move on to other projects and might not be able to help later on. Also, it's nice to have some easy tasks in the bugtracker that can be processed by newbies.

Performance Schema is a new feature in MySQL 5.5 and is activated by default since 5.6. It monitors a lot of the internal functionality like file access and queries so you can later see which parts you can optimize. Some performance measurements done by the MySQL developers showed that keeping it activated has an performance impact of around 5%. Though this doesn't sound that good at first I think you can gain a lot more performance by the insight you have in the inner workings. Working with Performance Schema is supposed to be rather complex ("Take two weeks to work with it"), ps_helper is a more beginner friendly functionality that can get you started with some useful metrics.

FrOSCon is the one of the most relaxing conferences I know. It is my goto place for seeing stuff that is not directly related to Java development. The low fee makes it a no brainer to attend. If you are interested in any of this years talks they will also be made available online.