I went to a lot, probably too many conferences in 2012. As the year is over now I'd like to summarize some of the impressions, maybe there's a conference you didn't know about and you'd like to attend this year.

FOSDEM is the Free and Open Source Software Developer European Meetup, a yearly event that takes place in Brussels, Belgium. There are multiple tracks and developer rooms on a multitude of topics ranging from databases to programming languages and open source tools. The rooms are spread across some buildings at the University so there might be some walking involved when switching tracks. What is rather special is that there's no registration involved, you just go there and that's it. The amount of people can be overwhelming, especially in the main entrance area. Unfortunately I was rather disappointed with the talks I chose. The event is a very good fit if you are working on an Open Source project and, as the name of the conference suggests, want to meet other developers of the project.

BED-Con is a rather young conference organized by the Java User Group Berlin-Brandenburg. I haven't been there in the first year but in 2012 it still had a small and informal feeling. The conference takes place in three rooms of the Freie Universität Berlin, the content selection was an excellent mixture of technical and process/meta talks, most of them in German. If you can afford the trip to Berlin I'd definitively recommend going there.

The largest and best known German Java conference. There are two editions, JAX in April in Mainz (the one I attended) and W-JAX in November in Munich. There's one huge hall and several smaller rooms and a wide variety of topics you can choose from. I never planned to go there as the admission fee is rather high (thanks to Software & Support for sponsoring my ticket) but I have to admit that it really can be worth the money. There were excellent talks by Charles Nutter, Tim Berglund and many more. The infrastructure (food, coffee, schedules) is very good, if you are on a business budget you can gain a lot by visiting.

A niche conference on Search, Scale and Big Data. A lot of people are coming from overseas just to visit. If you are interested in these technologies definitively go there. For more information see this post.

My first real Barcamp. Really fun event but of course there are always some sessions that are not as interesting as anticipated. Topics ranged from Computer and work stuff to more soft content. I always thought this is a nerd only event but as there is so much to choose from Barcamps might even be interesting for people who are not that much into computers. Very well organized, no admission fee, interesting sessions.

The International Software Craftmanship and Testing Conference. Awesome setting and the first open space conference I attended. It takes place in a seminar center in the middle of nowhere which makes it a very intense experience. Besides the sessions there are a lot of informal discussions going on around the day with the very enthusiastic attendants. The 2012 event started Thursday evening with a world cafe, Friday and Saturday open space and an optional code retreat on Sunday. I'd say there were three kinds of sessions: informal discussion rounds, practical hands on sessions and talks. It seems that most people liked the practical sessions best, so if I could choose again I'd go to more of those. Thanks to the sponsors all we had to pay was the accommodation and one meal which additionally makes it an incredible cheap event. Be quick with registration as space is limited. 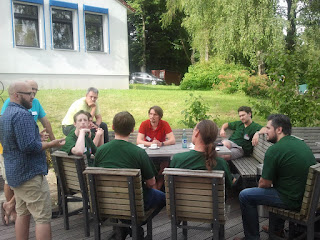 The Free and Open Source Software Conference is a great community weekend event with different tracks on admin and development topics. I like it a lot because of the variation of talks and the very informal setting. It's a mixture of holiday and learning and for me a chance to get information on topics that are not presented at the other developer conferences I attend. Talks are partly english, partly german. You can either stay in St. Augustin or in Bonn, it's only a short tram ride. 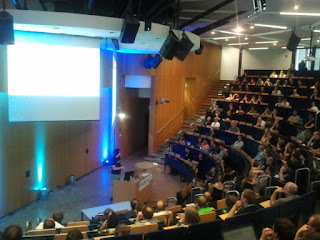 JAX On Tour is another event I attended because of the generous sponsorship of Software & Support. It's not a conference but a training event with longer talks that are grouped together. It's a small event and there's always time for questions. I learned a lot, mainly about documenting architectures. This is a really good alternative to a normal conference to grasp a topic in depth.

If you are into OpenCms you probably already heard about OpenCms-Days, and if not this is probably not for you. Two days of OpenCms only, used by Alkacon to present new features and by the community to present extensions and projects. I am always impressed that there are people who fly around the world just to attend, but of course this is the only conference of its kind worldwide. There is always something new to learn and it's fun to meet the community.

A one day event on Google technologies. There have been several events in different cities worldwide, this one organized by the Google Developer Group Karlsruhe. The organizers were really unlucky as multiple speakers canceled on short notice, nevertheless there were some really good talks. Kudos to the organizers who managed to get this event started in a really short time frame.

I originally went to ApacheCon because it took place in Sinsheim, which is close to Karlsruhe. Fortunately in this year the conference also hosted the LuceneCon Europe, so there were lots of interesting talks for me. Additionally I had been voted as a committer to the ODFToolkit just before it and I was able to meet some other people that are involved in the project. The location was really special (soccer stadium) but I think a lot of non-locals had to suffer a bit because of the lack of hotels and taxis. This community event can be really interesting even if you are only a user of a project. 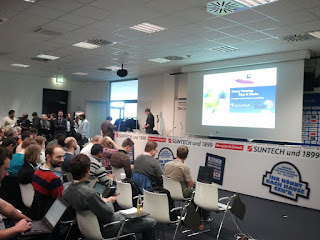 Devoxx is the largest Java conference in Europe, organized by the Java User Group Belgium. They attract a lot of high class speakers so this is the place to keep you informed on the Java universe. Located in a large multiplex cinema in a suburb of Antwerp, very comfy chairs and huge screens. The week starts with two university days that contain longer talks and are usually less crowded. This year I went there on Wednesday, due to a train strike in Belgium I arrived quite late. I have to admit that it probably wasn't worth the hassle for only 1.5 days. If you are going there I recommend to stay the whole week. 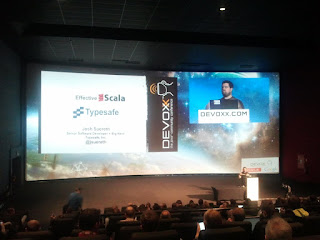 So this was a lot last year. I don't plan to visit that many conferences again. I am sure that I will be going to Berlin Buzzwords, Socrates, FrOSCon. There probably will be more, but it won't get 13 this year :).

Finally, I couldn't have afforded to pay for all those conferences myself, so thanks to synyx, who paid for FOSDEM and BEDCon when I was still employed there and provided me with a free ticket to OpenCms-Days. Thanks to Software & Support for letting me attend JAX and JAX On Tour for free, those guys are fantastic supporters of the Java User Group Karlsruhe. Also, thanks to the Devoxx team for letting me attend as an ambassador of our JUG.